Specialty crop growers in Florida, Texas and the Gulf Coast are scrambling in the wake of hurricanes Harvey and Irma. Irma dissipated Sept. 15 off the coast of New England, but more information is becoming available about the damage sustained by growers, many of whom had little crop insurance.

“Entire plantings, every bush has been laid over,” McAvoy said.

He expects disease to follow where plant roots have soaked in floodwater for more than 24 hours.

In wet conditions, soil-inhabiting fungi cause damping off in vegetable seedlings like tomato, pepper and eggplant.

“These pathogens infect portions of the plant at or below the soil level, resulting in collapse and death of the seedling,” McAvoy wrote in an email to growers. 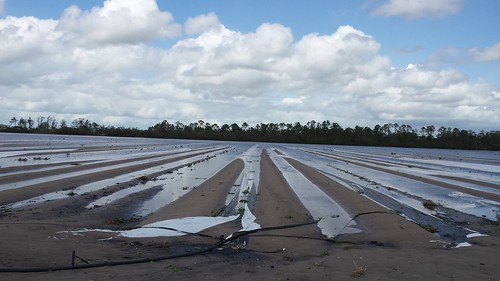 Vegetable growers have also been hit hard – operators of about 5,000 acres in southwest Florida lost all of their crops of tomatoes and peppers that had been planted in August, McAvoy said. A study of commercial tomato crops after the 2004-2005 hurricanes showed that the tomato plants never fully recovered.

Other growers sustained damage to early plantings, or plastic laid down in fields for a crop. Strawberries hadn’t been planted yet but much of the plastic in their fields that had been laid down to protect against weeds is now torn out of the ground, tangled in drip tubes, and in some cases buried in large piles of mud.

The problem of torn-up field plastic is a monetary problem in and of itself, McAvoy said: It can cost $2,000 an acre to lay plastic – and that doesn’t even consider the cleanup costs. McAvoy estimates somewhere between 15,000 and 20,000 acres were affected by the hurricanes, putting the plastic damage costs in the ballpark of tens of millions of dollars.

Hurricanes hit all growers. In Palm Beach, Miami-Dade County, growers lost as much as a week’s work planting corn, McAvoy said, and Irma “just came up through the heart of the citrus industry.” Texas cotton growers were hit hard by Hurricane Harvey, according to tweets by U.S. Department of Agriculture Secretary Sonny Perdue. Major Florida crops also had low rates of crop insurance. Nationally, only 2 percent of the strawberry crop was covered by insurance, according to the report. Only 16 percent of peppers were covered.

McAvoy said the report’s statistics fit with what he knows from talking to Florida fruit and vegetable growers: Many of them are not insured, or are only minimally insured. In an email to Florida growers, he cautioned against them withdrawing insurance claims that didn’t meet their insurance deductible, since a later claim could push the total over the deductible and qualify them for insurance later on.

While the federal disaster relief program and other programs could also help pay for cleanups and replanting trees, “by the time you file and receive money, it could be a year,” he said.

Florida vegetable growers are dealing with extra fiscal challenge. Last year, the prices were low due to competition from Mexican growers, and many Florida growers lost money.

McAvoy said growers hit by the hurricanes have two options: Keep going, or get out.

“We had the same thing after (Hurricane) Wilma,” he said, referring to the 2005 storm. Meanwhile, USDA’s Sonia Jimenez, who’s deputy administrator for the specialty crops program, wrote that “USDA staff in the regional, state and county offices stand ready and eager to help.” She added that the USDA Farm Service Agency, administers many safety-net programs to help producers recover from eligible losses, and the USDA has established a website with details about the programs.

McAvoy said that many farmers are optimists and likely will keep going.

“I think they’re going to do what they can,” he said, even if that means scaling back their farming operation or applying for partial disaster relief.

To learn more or to donate, visit www.floridafarmbureau.com or www.floridaspecialtycropfoundation.org.