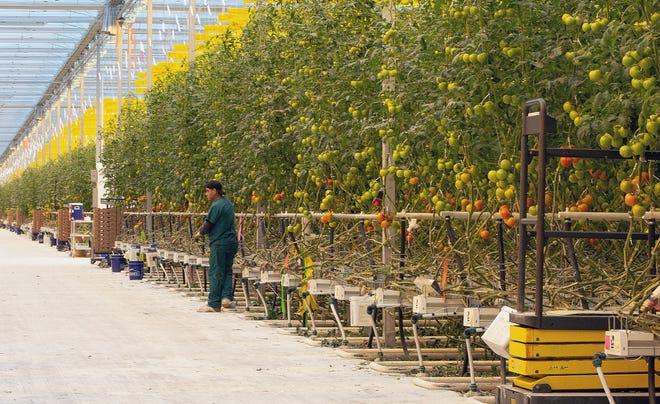 Lakeside Produce officials held public tours Jan. 15 to showcase the new company’s high-tech greenhouse in Mills River, North Carolina, a massive, 15-acre facility where a variety of tomatoes and mini cucumbers are grown for distribution from Maryland to South Florida.

According to a story by BlueRidgeNow/Times-News, the 10-month-old business – which required an initial investment of $30 million to install specially designed lighting and countless other features – is part of a growing trend of progressive agribusinesses that have been cropping up in Henderson County the past several years.

Chris Cervini, Lakeside Produce owner and CEO, said Sierra Nevada Brewery, which poured its first craft beer here several years ago and continues to add tap rooms throughout the area, is a perfect example of a new, environmentally conscious mindset that focuses on sustainability.

“Sierra Nevada led the way in Henderson County for being very progressive, from their water recycling and re-using any of the trees they cut down when they built the facility,” said Cervini, a third-generation grower whose family business is headquartered in Leamington, Ontario, Canada.

“There’s a lot of (agricultural) progress coming to this area, and that’s exciting,” he added. “The cool nights and the warm days actually help us; they move sugars in the fruit that increases the flavors.”

Greenhouse farming also yields about 10 times more produce per acre than traditional farming, according to Cervini. He ultimately would like to see his greenhouses producing 750,000 pounds of fruit per acre.

“The goal is to produce year-round,” he said.

Also according to the Times-News story:

Cervin also said planned expansion eventually will cover 50 of the company’s 116-acre parcel off Ladson Road, with an estimated total capital investment of $100 million and the creation of 300 total jobs.

The company currently has 55 full-time workers, and 45 employees will be added to the payroll during each of two construction phases, he said.

“For every agriculture job we produce, it creates another three jobs in the local economy,” Cervini said, explaining how he arrived at the 300 new jobs figure.