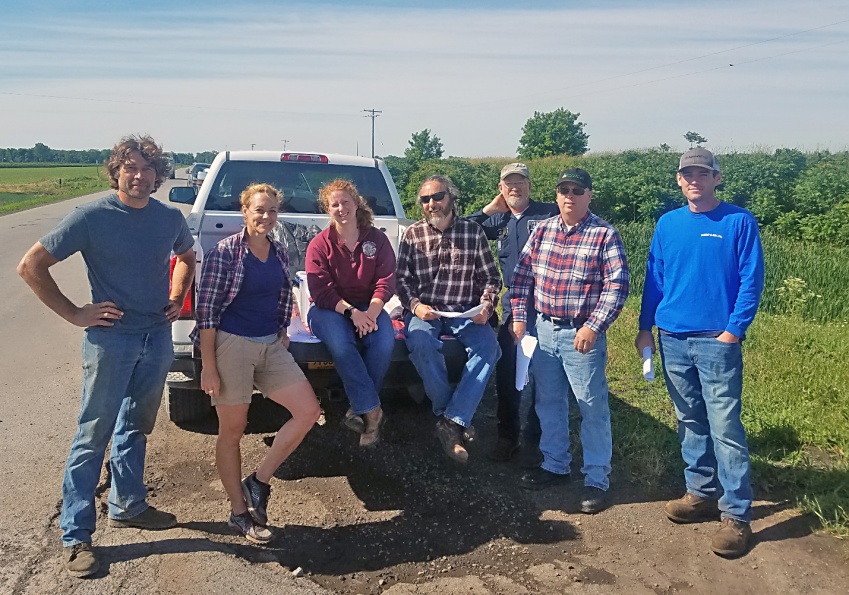 The six are muck onion farmers who meet weekly during the growing season for what is known as Muck Donut Hour, to discuss crop protection tactics. NYSIPM develops sustainable ways to manage pests and helps people use methods that minimize environmental, health and economic risks. The award honors individuals who encourage the adoption of IPM in their businesses, schools, communities, and farms, and who develop new tools and tactics for sharing these practices.

Onions grown in muck soil – organically rich former swampland where production practices are unique and intense – are one of the most valuable crops in New York, with an average value of $34.6 million. In the Elba muck and surrounding pockets in Orleans, Genesee, and Livingston counties, eight farms produce 40% of the New York onion acreage on 3,000 acres. Mortellaro, Triple G, CY, and Big O farms account for almost 75% of that production.

In 2005, onion thrips infestations were nearly uncontrollable in New York. Populations of the vegetable-loving insect were resistant to multiple insecticides, and the hot and dry conditions created a worst-case scenario, causing crop losses exceeding 30%. The Elba muck growers helped Cornell researchers conduct dozens of research trials and host large-scale demonstrations on their land, in an attempt to understand the biology, ecology, and management of thrips. “The result culminated in a practical thrips management program, which includes regular scouting of onion fields followed by sparing use of insecticides designed to minimize resistance”, said Brian Nault, Professor of Entomology at Cornell AgriTech.

The Elba growers are now able to successfully manage their thrips infestations. They average between 1- 4 fewer insecticide applications and have saved an average of $113/acre, which is approximately $6,000-$226,000 per farm per year. In addition to regular scouting, the other key tool in the IPM arsenal is information exchange and discussions at the Muck Donut Hour, which Christy Hoepting, Senior Extension Associate with the Cornell Vegetable Program, describes as a way she keeps her ‘finger on the pulse’ of the pest complex each year.

A CCE tradition for over twenty years, the Muck Donut Hour is held weekly during the growing season. There growers and researchers discuss the latest research findings, scouting and spray reports. Hoepting notes the willingness of the muck onion farmers to entrust their crops to Cornell’s research, and their transparency in sharing spray records. She continues: “the Elba growers are undeniably brave; to so wholeheartedly adopt IPM practices demonstrates the extent of their faith in Cornell’s research on their farms. The risk of a pest spiraling out of control in a high-value onion crop is frightening. Clearly, these growers believe in solid science and go above and beyond to support it.”

Steven Beer, Professor Emeritus of Plant Pathology and Plant-Microbe Biology at Cornell University, says, “without the cooperation of the Elba onion growers, it is not likely that so many IPM-themed tactics would have been adequately tested under real grower conditions. They set the standard for other growers.”

The Elba muck onion farmers are:

The award will be presented to the pioneering growers during their Muck Donut Hour on July 30.