On Aug. 21, 2020, a drought watch was issued by the Department of Environmental Protection for 16 counties in Pennsylvania.

These counties include McKean, Potter, Cameron, Clinton, Clearfield, Center, Butler, Armstrong, Indiana, Cameron, Blair, Huntingdon, Mifflin, Juniata, Perry, and Fayette. DEP has requested that residents in these counties use water wisely and follow water conservation tips. This has led to some growers forgoing irrigation in some fields as water reserves run low and significant yield reductions in unirrigated sweet corn and cucurbit crops.

Irregular watering has also led to continued issues with blossom end rot in tomatoes and concern about the splitting of sweet potato tubers if the crop is suddenly subjected to a significant rain event. Growers are also concerned about split fruit set in pumpkin crops due to record high temperatures. In July, Pennsylvania had the warmest average daily temperature (74.9°F) on record in the past 126 years according to the Northeast Regional Climate Center.

Downy mildew on cucumber is now widespread across Pennsylvania as well as the northeast and mid-Atlantic regions. There was also a report on butternut squash in Blair County. This means growers should be actively managing for downy mildew on all types of cucurbit crops. If finished harvesting a field for the season, consider disking it under or burning it down with an herbicide to reduce the spread of inoculum within and between farms. On pumpkin and winter squash, Revus (mandipropamid, FRAC 40) is considered effective and can be included in a rotational program with Ranman, Presidio, Zampro, etc. However, neither Revus or Presidio is recommended for use on cucumber or cantaloupe due to fungicide resistance. Effective organic management options for downy mildew are limited and primarily rely on copper-based fungicide applications. Check the CDM ipmPIPE website for the latest reported outbreaks and disease forecasting information or call the 1-800-PENN-IPM hotline which is updated on Wednesdays each week.

Powdery mildew on cucurbits is also now considered widespread. Management with fungicides is most effective when initiated early in the season with the onset of symptoms. However, as the season progresses, it is not uncommon to lose the battle with powdery mildew as the fruit mature and disease pressure across the region builds. Later in the season, it is recommended to drop back to using a protectant-based program to help reduce the potential development of fungicide resistance by not exposing the severely infected leaves to powdery mildew targeted fungicides such as Vivando, Luna Experience, Torino and Quintec. The continued use of a protectant such as chlorothalonil is recommended to help protect the pumpkin handles. Severe powdery mildew on the handles will cause them to turn brown and shrivel reducing overall marketability. 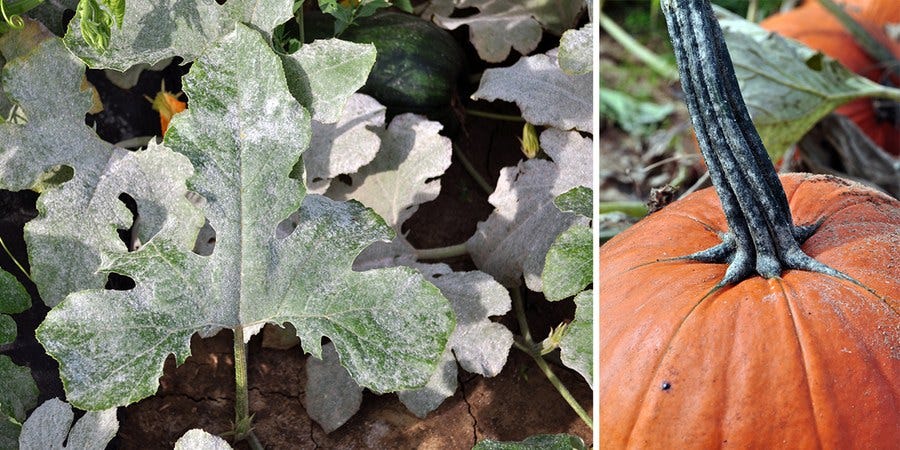 Severe symptoms on powdery mildew on the leaves (left) and handle (right) of pumpkin. At this point, powdery mildew management should target protecting the handles using a protectant fungicide such as chlorothalonil. Photo: Beth K. Gugino/ Penn State

Anthracnose fruit rot can be especially problematic when ripening peppers past green to mature yellow, orange, and red. Ripe and overripe fruit are especially susceptible. The disease can also be a problem with tomato and eggplant. The fruit lesions are initially small circular depressions that enlarge and develop masses of pink to orange-colored spores. These spores are easily dispersed by rains and heavy winds and the disease typically develops as hot spots in the field. Excessive nitrogen can promote the disease by promoting lush dense canopy growth making conditions more favorable for disease as well as restricting fungicide penetration into the canopy. 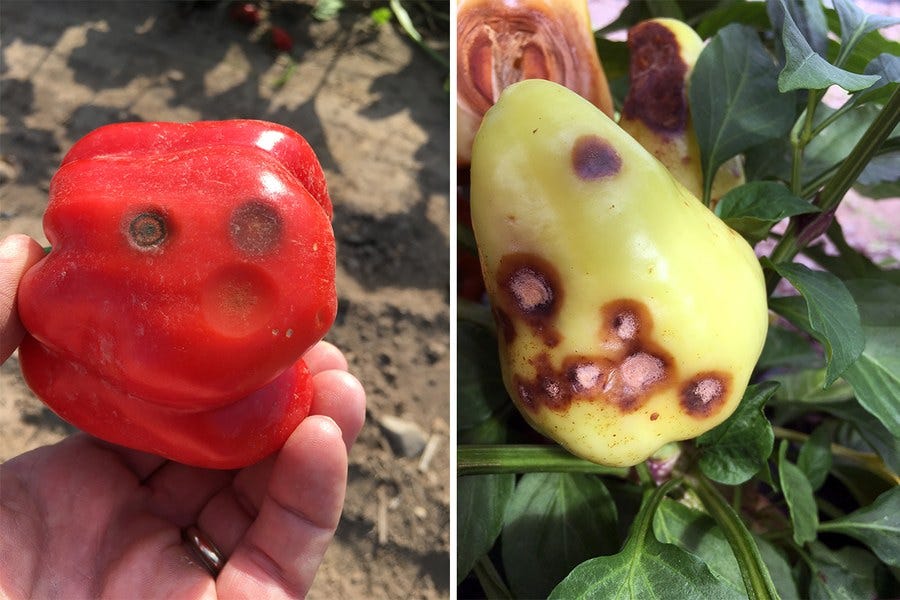 In fields with a history of the disease, initiate fungicide applications at flowering or fruit set. As the fruit mature, targeting applications to cover the fruit is important. Rotate a protectant fungicide such as mancozeb or chlorothalonil with products such as Aprovia Top (FRAC 3+ 7), Quadris Top (11 + 3), Priaxor (11 + 7), Cabrio (11) and Quadris (11). Follow label restrictions regarding the total number of applications per season. In addition, roguing infected fruit from the field will reduce overall inoculum pressure and rotating out of susceptible crops from 3 to 4 years.

Problems in sweet corn have included increases in corn earworm, fall armyworm, pollination issues, and brown or blistered kernels. Really great (and very cool!) interactive maps of the moth trap captures are at the PestWatch website. You can click on any point and see the time series at that point or use the time slide bar at the bottom to watch the map progression. Corn earworm counts have been high for several weeks for most of the state. These night-flying moths lay individual eggs, and they strongly prefer laying on fresh silk, but they will deposit eggs on drying silk or even on tassels if populations are high. Eggs hatch within a few days, and the neonate larvae tunnel through the silk tube into the tip of the ear. Contact with an insecticide needs to occur before they are protected within the ear.

GE cultivars that express the VIP (vegetative insecticidal protein), such as Remedy, continues to give effective control, but cultivars with various Cry (CryIAb, CryII, etc.) did not give control in recent years due to resistance by corn earworm. Fall armyworm (FAW) counts increased sharply in Erie, as it has in past years. Based on molecular signatures, we have traced the origins of FAW that migrate to most of PA as coming from Texas. Populations migrate northward and get shifted toward the east, so we typically get FAW increased in the Appalachian and western and south-central areas of PA. Although FAW does a lot of feeding on vegetative stages, when ears become available they will move quickly into the ear from the tip, side, or base. Pollination problems can be associated with hot, dry weather. Corn pollen can desiccate under these conditions.

Blistered, brown kernels may be from a physiological condition or reflect water problems, but also can come from brown marmorated stink bug (BMSB) feeding through the husk. Sweet corn is a preferred host, and kernel damage can occur without visible symptoms on the husk. This time of year we can get BMSB and other stink bug damage on many vegetable crops: a lot of their feeding occurs at night. These bugs inject digestive enzymes into fruit, killing the plant cells, and the bugs then ingest the dissolved plant cells. They leave behind a dry, whitish, corky residue, which can help diagnose stink bug damage from various pathogens.

A summary (in English and Spanish) of BMSB damage and control with good pictures of damage from different crops, written in 2016:

Two-spotted spider mites continue to be a problem in multiple locations. The ‘spots’ come from how these mites sequester waste materials and is a good diagnostic for this species of mite. Mites populations can ‘flare’ if various beneficial predatory species are lacking, or also from a change in plant physiology that results in more rapid population growth. Specific miticides are recommended, as opposed to insecticides when chemical control is necessary. Mite problems often start out spotty in a field, so careful scouting and spot-spraying can be helpful. We are also seeing grasshopper damage in onions and other crops. Grasshoppers will move into vegetable crops when surrounding vegetation is dry. Striped cucumber beetles, spotted cucumber beetles, and western corn rootworm adults are active in cucurbits. Adults will feed on rinds and stems, scarring the fruit.

As day-neutral strawberry, primocane-fruiting bramble, and late-season blueberry harvest progresses, spotted wing drosophila damage continues to be of concern. Besides physical damage and the presence of larvae in fruit, there is the concern of increased disease incidence for diseases such as Cladosporium fruit rot, which previously had been considered only a colonizer of dead tissues or minor fruit rot. This disease is more frequently colonizing raspberry fruit, pedicels, and blossoms, and research conducted in Maryland had shown that SWD may be a factor in increasing infection rates through several possible mechanisms. The disease causes a dark green velvety growth on all of the plant parts mentioned above. Effective fungicides have yet to be identified, but controlling SWD, harvesting fruit very thoroughly, and improving air circulation and drying in the planting appears to help with the management. 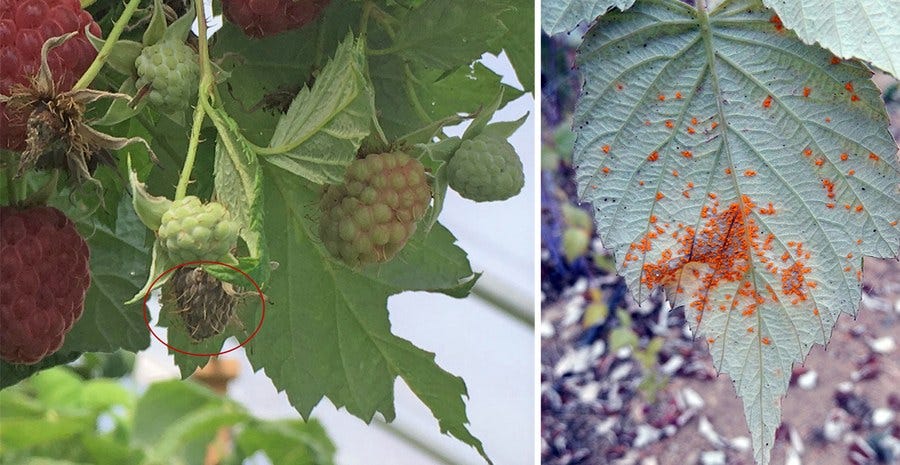 (Left) Symptoms typical of advanced Cladosporium infection can be seen in fruit in behind green berry. (Right) Late leaf rust on underside of black raspberry leaf, which could be mistaken for orange rust. Photos: K. Demchak/Penn State

Late leaf rust is present in some red and black raspberry plantings. This disease should not be confused with orange rust, where orange pustules are present much earlier in the year. Late leaf rust is not systemic, so plants should not be removed to protect the rest of the planting. Category 3 and 11 fungicides help with management but usually are not needed unless the infections are severe.

Varieties used in strawberry plasticulture plantings as plug plants are very susceptible to a number of different diseases, including anthracnose fruit and crown rot, Phytophthora crown rot, and now there is concern that Pestalotiopsis may be of increasing concern. This disease can cause a root, crown, or fruit rot; symptoms could be confused with anthracnose. Heat stress this summer and the necessity of frequent misting during the plug plant rooting process means that diseases may be present at higher levels than normal in plug plant planting stock. When planting, discard any plug plants of questionable health, and remove dead and dying leaves or runners with lesions from the plug plants. This can be done either before or immediately after planting to remove potential disease inoculum.

Consider an application of a broad-spectrum fungicide such as captan soon after planting, and if phytophthora is a concern, a dip of a product such as Aliette or a phosphite product, or an application of Ridomil through the drip system about two weeks after planting. While prophylactic fungicide applications generally have not been needed in the past, this is likely a good year to increase fall applications of products such as captan, Switch, and propiconazole to keep minimize disease incidence.