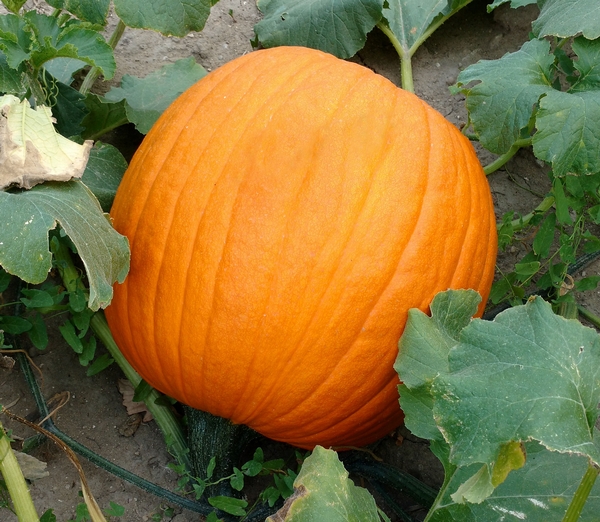 With pumpkin season kicking off, Univeristy of Arkansas Extension Specialist Aaron Cato is sharing recommendations for managing common pumpkin pests. In addition to the recommendations below, please consult the Southeastern Vegetable IPM Handbook for more guidance.

We’ve seen less cucumber beetles this year compared to the last and it seems it has something to do with the early heat. Squash bugs don’t seem to mind the heat as much and have been around in summer squash all year and now are getting into pumpkins. These two pests are generally considered the most serious pumpkin insect pests in Arkansas as they transmit bacterial diseases. These diseases are well known by most of our growers and typically lead to many unnecessary over-sprays, however, both pests are very easy to scout for and these diseases can be prevented if insecticides are on-time. Outside of our disease-causing pests, melonworm is the most serious pest and widespread damage was observed across the entire state and MidSouth in 2021. We don’t see those levels of damage every year and we need to be on the lookout for moths and larvae to prevent major losses.

Spotted and striped cucumber beetles are known to be an issue in Arkansas and can transmit bacteria that can cause bacterial wilt (Fig. 1 and 2). Adults feed on the foliage, flowers, and on the surface of the fruit, and plants are susceptible to wilt transmission as soon as they emerge or are transplanted. Younger plants (before 4-leaf) are most susceptible to the disease, therefore scouting twice a week is necessary early on. Thresholds depend on the type of cucurbit you are trying to protect and the age of the planting. An insecticide application should be made to pumpkins when 1 cucumber beetle is found every plant on average until plants have 5 true leaves. After this growth stage an application should be made when populations reach 4-5 beetles per plant on average. Cucumber beetles are known to migrate into fields quickly, which warrants frequent scouting. This is especially important after an insecticide application is made, as re-infestation at densities above threshold is possible in only a few days.

Many insecticides can be used to manage cucumber beetles, but considering that most can flare aphids, scout to make sure applications are necessary. Effective insecticides include pyrethroids (IRAC 3A – bifenthrin, lambda cyhalothrin, etc.), neonicotinoids (IRAC 4A – imidacloprid, acetamiprid, dinotefuran, thiamethoxam, and clothianidin), carbamates (IRAC 1A – carbaryl), and organophosphates (IRAC 1B – malathion). Neonicotinoids such as imidacloprid and dinotefuran can also be applied as drip applications and may provide some aphid and squash bug suppression. If you didn’t use a neonicotinoid drip application at planting and are seeing high numbers of cucumber beetles, I recommend getting out an imidacloprid application (soil only) ASAP to help rotate effective insecticide mode of action (MOA – IRAC Code). If populations are excessive, use a knockdown foliar insecticide even when you still expect protection from a systemic drip applied insecticide.

Like cucumber beetles, squash bugs are an issue as soon as plants are in the field and can vector bacteria that cause cucurbit yellow vine disease, also known as yellow vine decline (Fig. 3, 4, and 5). Smaller fields are most susceptible, and numbers generally are the highest on field edges and during fruit-set and bloom. Fields should be monitored at least once a week and monitoring should be focused on the underside of leaves, at the base of plant, and under fallen leaves where squash bugs often congregate. Adults are difficult to manage and applications should target young nymphs or eggs. Apply an insecticide when egg masses or nymphs are observed on every few plants. Effective insecticides include pyrethroids (IRAC 3A – bifenthrin, lambda cyhalothrin, etc.), neonicotinoids (IRAC 4A – imidacloprid, acetamiprid, dinotefuran, thiamethoxam, and clothianidin), and carbamates (IRAC 1A – methomyl). Neonicotinoids such as dinotefuran and imidacloprid (soil only) can also be applied as drip applications and may provide some aphid and cucumber beetle suppression.

Melonworm, Diaphania hyalinata, is a pest of pumpkins that feeds just under handles and etches the rind of pumpkins. There is a lot of confusion as to what pest species we are seeing in Arkansas pumpkins with names such as “rindworm” or “pickleworm” being used. Pickleworm is a different species, Diaphania nitidalis, and not one that we will talk about much considering it is less common. Much of this confusion comes from the sporadic nature of this pest and how quickly damage can sneak up on growers.

Melonworm is a tropical moth species (Fig. 6) which migrates to Arkansas from coastal regions in August-October, with arrival times varying from year-to-year which makes timing of management very difficult. Larvae are green caterpillars with two longitudinal, white stripes down their back (Fig. 7). Larvae will quickly defoliate leaves of pumpkin plants and leave a “skeletonized” appearance with only the leaf veins remaining (Fig. 8). You can often find larvae hiding under rolled, or turned pumpkin leaves as seen in fig. 8. Melonworm larvae can quickly burrow into the rind of the pumpkin and under the stem/handle which causes the stem to fall off (Fig. 9). Feeding on the rind results in the fruit ultimately becoming unmarketable.

Melonworms don’t overwinter in Arkansas so its arrival each year depends on the climatic conditions for the year. In 2021 moths showed up much earlier than previous years and began multiplying rapidly before pumpkin harvest started. Significant damage was easy to see at many commercial pumpkin operations across Arkansas by late September. The occurrence of moths should be an early sign for growers that an insecticide application may be necessary. If growers can easily find these white and brown moths flying in plantings, or are seeing larvae on leaves, a pesticide application will be necessary. A threshold for this pest doesn’t currently exist and research in Arkansas Is ongoing.

Many effective products for melonworm are available but effective residual control for each product will lead to more or less favorable results. Caterpillar specific products containing chlorantraniliprole (IRAC 28 – Coragen), cyantraniliprole (IRAC 28 – Exirel), or cyclaniliprole (IRAC 28 – Harvanta) will offer the longest residuals and should provide at least 21 days of residual control. Other caterpillar specific products such as spinetoram (IRAC 5 – Radiant) and methoxyfenozide (IRAC 18 – Intrepid) and also broad-spectrum insecticides such as pyrethroids (IRAC 3A – bifenthrin, lambda cyhalothrin, etc.) will provide around 1 week of control. These insecticides should be reapplied in 7 days if moths or larvae are still being observed.

Melon aphid, Aphis gossypii, is considered a secondary pest in Arkansas pumpkin production. Insecticides such as pyrethroids, pyrethrins, carbamates, or organophosphates that are used to control cucumber beetles, squash bugs, and other pests, kill the natural enemies that usually keep aphids suppressed. If you have used broad-spectrum insecticides in your pumpkin patch this year, including many organic options, then you need to be scouting for aphids (Fig. 10). There are many product options for aphid control such as acetamiprid (IRAC 4A- Assail, Tristar, and Anarchy), flupyradifurone (IRAC 4D – Sivanto Prime), sulfoxaflor (IRAC 4C – Transform), and Flonicamid (IRAC 9C – Beleaf). Acetamiprid, sulfoxaflor, or flupyradifurone are likely going to be the easiest products to find locally. Aphid control is necessary when populations are building on every few plants and the natural enemy complex was collapsed by recent broad spectrum insecticide sprays.

Many of the insecticides mentioned here will control both cucumber beetles and squash bugs, and in most production areas of the state, these pests are likely to be present at the same time. Due to the risk of flaring melon aphids, a good strategy is to start early with a drip application of imidacloprid (Admire Pro) or dinotefuran (Venom or Scorpion) to prevent flaring aphids. These products usually give at least 3 weeks of suppression that should help protect from bacterial wilt or yellow-vine disease. Foliar applications of pyrethroids are usually relied on for cucumber beetle and squash bug suppression, but it is important to rotate in other Modes of Action like carbamates, neonicotinoids, or organophosphates where possible. Repeated use of one chemistry is likely to lead to lowered success of control. This is especially important when considering squash bug, as it is difficult to suppress this pest once infestations are excessive.

Melonworm is not likely to be a serious pest every year, but the losses we incurred last year are a stark reminder that we need to be scouting every week beginning in August. Rely on diamide products (IRAC 28) like Coragen or Exirel once moths or larvae are observed in fields. A second application may be necessary in 21 days if pumpkins still need to be protected.