US production area of greenhouse vegetables slows after surge

For over a decade, U.S. consumers have increased their demand for the year-round availability of tomatoes, peppers and cucumbers. The domestic produce industry initially responded by increasing protected culture cultivation of these popular crops, usually through the use of greenhouses. 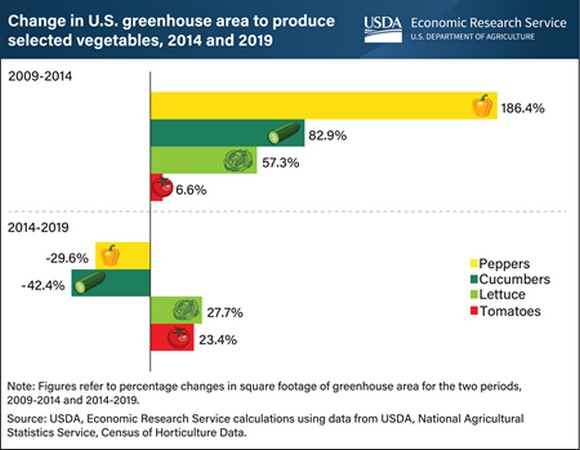 For example, the greenhouse area devoted to cucumber and pepper production in 2019 was down 42% and 30%, respectively, compared to the change between 2009 and 2014. In contrast, lettuce and tomato protected culture area was up 28% and 23%, respectively, over the same period.

Between 2014 and 2019, imports of greenhouse-grown produce have increased significantly, a factor in the lackluster growth in cultivated area in the United States. Further, imported produce has increased U.S. supplies and pressured domestic prices downward, dampening incentives to expand U.S. greenhouse production.