The Cuyama Valley in California is the driest agricultural region in the county; the valley floor gets just a little more rain than the Sahara. Yet for the past 75 years, this high desert region has been a mecca for water-intensive farming on an industrial scale – first, alfalfa, and now, carrots, a $69 million annual crop.

Most years, farmers pump 60,000 acre-feet of water out of the valley’s giant groundwater basin – enough water, in theory, to supply six cities the size of Santa Barbara. That’s three times the sustainable yield of the basin, or the amount of water that reliably flows in from rain and runoff.

In the heavily farmed central portion of the Cuyama Valley, studies show, the water table is dropping as much as eight feet per year, the ground surface is sinking and well water is 1,000 feet deep in places. Some of the water being sprayed on crops is 33,000 years old. Water quality in the valley is poor.

County, state and federal agencies have been documenting the de-watering of this basin since the 1950s, even as the Cuyama River marshlands turned into desert, the cottonwoods died and an entire oak woodland vanished. 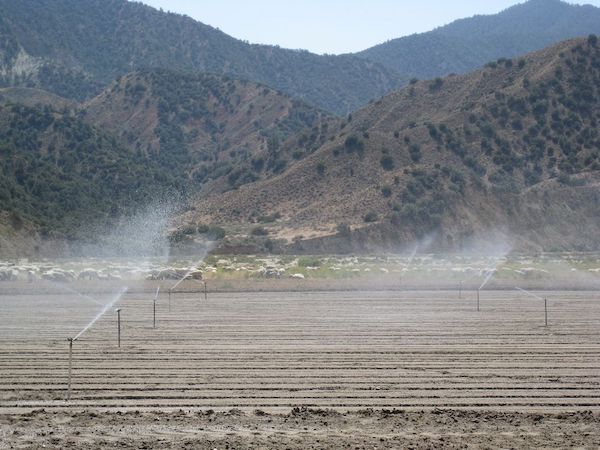 Heavy irrigation on carrots, a water-intensive crop in the high desert of the Cuyama Valley, has contributed to the dramatic decline of the underlying groundwater basin (Photo: Santa Barbara Water Agency)

Now, to the rescue – belatedly – comes the state Groundwater Sustainability Act of 2014, which aims to halt “significant and unreasonable reduction of groundwater storage.”

According to a story in online publishing outlet Edhat, to comply, growers in the central Cuyama Valley may be required to cut their pumping by as much as two-thirds over the next 20 years. The world’s two largest carrot producers – Grimmway Farms and Bolthouse Farms of Bakersfield, Calif.  –  would be hardest hit.

“It was clear the future was borrowed against, and now there are consequences,” said county Supervisor Das Williams, who represents the valley and serves on the 11-member board of the Cuyama Basin Groundwater Sustainability Agency. The board recently submitted its pumping reduction plan to the state, meeting a Jan. 31 deadline for basins in “critical overdraft.”

Williams concedes that a two-thirds cutback in agricultural pumping in the Cuyama Valley would be “catastrophic” for some growers. According to an economic study for the agency, it would idle 5,000 out of 6,300 acres currently in carrot production, slashing gross annual revenues from $69 million to $14 million by 2040.

In all, the study found, nearly two-thirds of valley cropland, including carrots, potatoes, grapes, onions, garlic, lettuce, olives, peaches, pistachios and alfalfa, would go out of production, and gross annual revenues would plummet from $121 million to $45 million by 2040.

But without massive pumping reductions, Williams said, residential wells will go dry. More than 1,000 people live in the valley, many in the rural communities of New Cuyama, Cuyama and Ventucopa. Wells are their only source of water.

“I don’t think you’ll find anybody who’s happy with this plan,” Williams said; he had favored starting the reductions sooner. “We had a pretty intimidating task. I think it took everybody – the small growers and the large growers – to have to go into a place outside our comfort zone to agree to our compromise.” 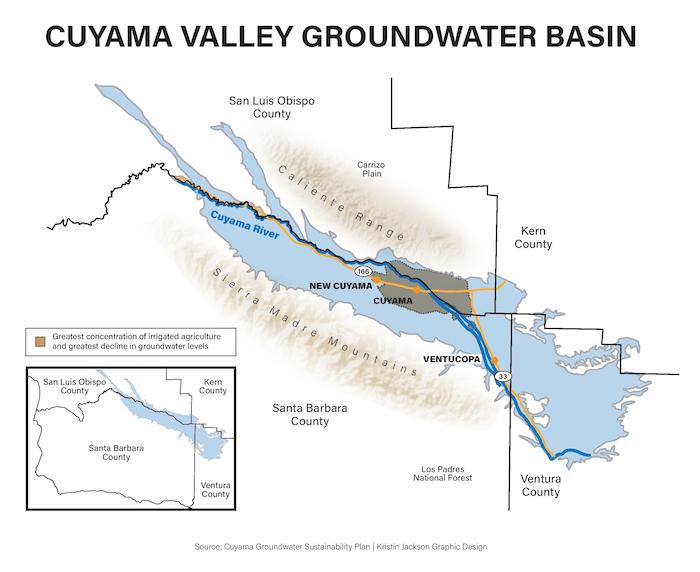 According to the edhat report:

The state Department of Water Resources is accepting public comment on the Cuyama Valley groundwater sustainability plan until April 15 (https://sgma.water.ca.gov/portal/gsp/preview/32). The Cuyama basin is one of 21 groundwater basins in California and the only one in Santa Barbara County to be listed by the state as in critical overdraft. Most are in the Central Valley.

Paul Chounet, a groundwater agency board member who is president of the Cuyama Community Services District, says that the millions of dollars that the big growers make in the valley don’t stay in the valley. Their workers come in from outside the area, and there are few local businesses to spend money on. Chounet’s district supplies water to 600 residents of New Cuyama.

“Agriculture is important to the valley, but how important, is the question,” Chounet said. “They’re pumping at a rate that’s a danger to the whole community. I think people should be able to make money, but not at the cost of everything else.”

Louise Draucker, a 72-year-old retired teacher and New Cuyama resident who serves on the groundwater agency advisory committee, said she has witnessed springs drying up, trees dying and birds vanishing during her 46 years in the valley.

“Something needs to be done because we’re running out of water,” she said, adding that she views the new pumping reduction plan as “too little, too late.”

“This was a rich birding area,” Draucker said. “Not any more. The aquifer will not recover in my lifetime, and I plan on being around for another 30 years at least.”

Brenton Kelly, vice-chairman of the groundwater agency’s advisory committee, sees a bright agricultural future for the Cuyama Valley, absent water-intensive crops. Kelly works for Quail Springs Permaculture, a nonprofit educational farm near Ventucopa that relies on spring water, not well water. Carrots, he said, have been profitable in the valley because growers aren’t paying the full cost of water.

“It’s next to free to pump the water dry,” Kelly said. “They’re all crying they’re going to be put out of business. The valley’s not going to be fallow. We could keep all of the arable land in production if it were growing things like grapes and olives instead of carrots and potatoes.” 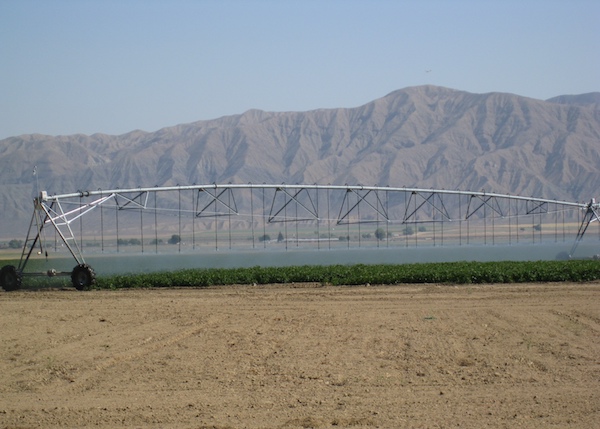 WHERE CARROT IS KING

Fully one-third of Cuyama Valley cropland is in carrots, and carrots represent more than half the valley’s agricultural value. The fields are concentrated in the central valley along Highway 166, between New Cuyama and Highway 33. According to the University of California at Davis, there are two carrot harvests here, one in summer and one in winter. During the growing season, overhead sprinklers run for days on end, even in 95-degree temperatures, turning the dry landscape green.

Jim Beck, the groundwater agency executive director, is vice president of the Hallmark Group, a Bakersfield-based consulting firm that provides services to Grimmway. He cautions that the agency’s estimates of future pumping reductions are based on “very preliminary” data.

“We’ve only just begun the process of a detailed understanding of the operation of the Cuyama basin,” Beck said. “It’s very clear that the basin is in overdraft, but understanding the local variabilities is really the key.”

Beck noted that the plan spells out potential projects such as cloud seeding and storm water capture that could help replenish the basin and reduce future cutbacks. The cost of these projects – up to $3.7 million per year – would be borne by the landowners who stand to benefit from them.

Grimmway and Bolthouse officials, including two who serve on the groundwater agency board, did not respond to multiple requests for comment last month. But in recent letters to the agency, both corporations said there was not enough information to accurately determine the sustainable yield of the Cuyama groundwater basin. They reserved the right to comment on or challenge their future pumping allocations.

Challenge or no, however, there is not much wiggle room under the law. If a basin in critical overdraft fails to meet state targets, and water levels underground continue to decline, the state can intervene to impose its own plan and management fees.

The Cuyama groundwater agency board of directors includes five growers and ranchers, but the five count as only three votes. Chounet, Williams and other public officials from Santa Barbara, Kern, San Luis Obispo and Ventura counties make up the rest of the board.

In a first for the Cuyama Valley, well records are no longer private. The board required all well owners – including farmers at the western and southeastern ends, where the underground basin has historically been in balance – to submit their 2019 pumping records to the agency by Jan. 31.

There are about 800 wells throughout the valley. The board will use satellite imagery, aerial land-use surveys, growers’ reports and a network of more than 100 wells to monitor future pumping reductions. 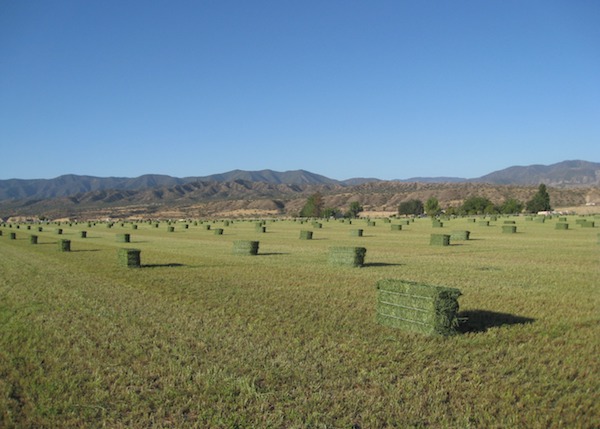 In another first, the board is charging an “extraction fee” of $19 per acre-foot of well water to cover the agency’s $1 million budget for 2019-2020. It’s due now, and it’s being billed as a one-year fee. Beck says the board “will revisit it in great detail” in the coming year.

But farmers with small operations in permaculture, pistachios, vineyards and apple orchards outside the central part of the valley are worried they will be on the hook for long-term fees. Many of these farmers won’t face pumping reductions; they’ve never had “deep straws” in the basin.

“I don’t like that somehow we’re going to share the cost of fixing that problem,” said Byron Albano, the only board member to vote against the plan in December. Albano owns Cuyama Orchards, 280 acres of organic Fuji apples on drip irrigation in the upper regions of the valley near Ventucopa. He’s paying $15,000 in pumping fees this year.

“My livelihood and the livelihood of everybody throughout my company all comes out of the valley,” Albano said. “We’re not gentlemen farmers. We’re vested in that valley, and we have planted our crops on the understanding that they’re sustainable. There’s no overdraft where my farm is.”

Beck said that by law, the agency’s operational fees must be shared by all.

“Because you’re in a basin that’s in overdraft,” he said, “you have requirements you can’t escape, whether an individual landowner is in balance or not.

Cattle ranchers, some of the largest landowners in the valley, are rattled, too. They don’t pay pumping fees, but they’re worried that the groundwater agency may try to assess a per-acre fee, an option that the board has left open.

Kathleen March, owner of the 1,000-acre Walking U Ranch, said any future per-acre fee would be tantamount to a property tax and would require an election, which, she said, the agency would lose.

“Cattle ranches are not going to vote to subsidize the water use of carrot growers and other commercial farming,” March said. “We use a tiny amount of water.”

Photo at top: Carrots cover one-third of the irrigated cropland and account for more than half of annual gross revenues in agriculture in the Cuyama Valley. A new state law will force farmers to cut pumping as much as two-thirds to restore the depleted groundwater basin by 2040. Photo: Santa Barbara Water Agency

–  Author of this package, Melinda Burns, is a freelance journalist in Santa Barbara, California