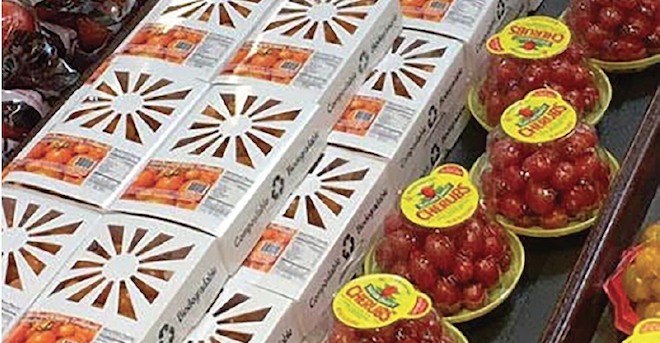 The quest for a better container has led northern Kentucky grower Linda Fritz to design a series of cardboard packages that ship flat to growers and can be easily composted or recycled.

Her own farm, Sun Sugar Farms, seasonally grows supersweet cherry tomatoes and edamame, aka baby soybeans that are served fresh and green.

In 2008, she started the farm on about an acre of land. Originally, the farm contained just tomatoes, but edamame was a new trend in the early 2000s – Fritz caught onto the crop when it was rare in markets and still growing in popularity. In 2010, she got her crop into a supermarket – the Kroger store in Cincinnati.

“I just hated putting them in the plastic containers,” Fritz said.

In 2018, she designed her own containers. She found a paper company that was able to manufacture a large batch for $30,000.

She wasn’t sure if she could sell the cardboard containers to other growers, but “I thought, at the very least, I’ll have 10 years’ (supply) of these if nobody else wants them.”

She’s not the only one to take a fresh look at what sustainable containers can be. In November 2020, 12 “eco-certified” orchards in the Northeast rolled out an “Heirloom Discovery Pack” of apples in packaging made from corrugated cardboard and water-based Eekoflex inks. Immokalee, Florida-based Lipman Family Farms showcased a new compostable packaging for its grape tomatoes at a trade show in April 2021. Watsonville, California-based A&A Organic Farms, a marketing company working with farms in California’s Central Coast, Mexico and South America, planned to debut the second generation of its ReadyCycle containers at the Organic Produce Summit in September.

But, as she’s quick to point out, Fritz’s own story and products are unique. Not only is she the grower and the engineer who designed the boxes, her packages are shipped flat and can be assembled either by hand or machine. This makes them good for larger growers looking for something machine-formable, but also smaller growers who may have staff building boxes by hand. None of her cardboard containers – she has eight different designs and counting – contain any cellophane, which would need to be recycled separately from the cardboard.

The cardboard containers have perforated edges for opening but are tamper-evident if they are closed with their anchor-locking system or closed with spots of glue. Some growers just tuck in the tabs so the boxes can be opened for a quick check-over for freshness just before the sale, she said. Also, she said, there are more vents than some competing boxes. She’s designed the vents on the different sides of the cardboard container with playful shapes representing earthworms, flowers, the sun and raindrops – all of the elements that made the fruits and vegetables possible.

Consumers notice the personal touch, she said. One wrote to her that the “designs are sophisticated, yet lighthearted and whimsical. They show you care, and we noticed.”

Marketing efforts for the cardboard containers to growers began at the trade shows Fritz attended. At one show, she spoke up during a group session about her products and afterward three growers came up to talk to her immediately. Since that time, she’s met more growers through her website, www.sustainableproducecontainer.com.

“In high quantity, these can be within a penny or two of the plastic clamshells, and be totally recyclable,” she said.

Some notable clients include Zero Grocery, a zero-waste produce delivery service in San Francisco and Los Angeles that Fritz said orders pallets of her flat-shipped boxes at a time. The packages have been popular with mushroom growers like 518 Farms in New York and Texas’ HiFi Mycology. Glenmary Farms, a strawberry greenhouse grower that supplies grocery stores in Virginia, is a customer, as is Duncan Farms, a community-supported agriculture operation in Huntsville, Alabama.

“Even though my first sales in 2018 were only about $200, I’m on track to sell over a million containers by year-end,” Fritz said. “I know it’s going to be a challenge to convince the bigger growers to switch. But I just got a call today from one interested in replacing their current annual usage of 300,000 plastic clamshells. I think consumers are ready, too.”