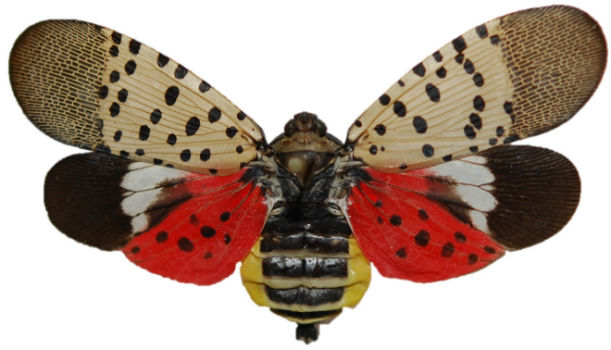 Spotted wing drosophila, spotted lanternfly and brown marmorated stink bug are invasive insect pests of fruit, but should they join the list of pepper weevil, swede midge and allium leafminer as invasive pests of vegetables?

Spotted wing drosophila (SWD) is unique in that it can penetrate sound fruit and looks for fruit that’s starting to ripen.

“Growers have expressed a concern about tomatoes,” Reinke said. So far, researchers are only finding casual visits to tomatoes with the SWD only feeding on ripe fruit on the ground.

“The tomato skin is just thick enough to deter SWD,” Reinke said. “It may become a concern if we develop thin-skinned tomatoes.”

Spotted lanternfly was first identified in Pennsylvania in 2014 and has been found in several Northeastern states.

Spotted lanternfly feeds on phloem and can only be found on tree trunks and not on the leaves or fruit. “Most vegetables are smaller plants and are not preferred hosts,” Reinke said. If the pest is found on vegetables, it’s typically near field borders where the spotted lanternfly is present in large numbers in adjacent woodlots.

Proper identification is important. “Make sure it’s brown marmorated stink bug,” Reinke said. “There are native stink bugs and some of them are beneficials.”

Pepper weevil is a serious problem for growers in the southern U.S. The pest doesn’t survive cold weather, but it does show up in northern states – transported in on produce brought up from the South.

“It’s mainly found near processors or packers,” Reinke said. “If you’re close to a packing facility, I’d look for pepper weevil. Once they’re here, you’ve got to deal with them the rest of the season.”

Pepper weevils can feed on any solanaceous plant but only lay eggs on peppers, eggplant and eastern black nightshade. “It can burrow into the fruit and is really trying to go for the seeds,” Reinke said. “It causes fruit drop so there’s less pack out.”

Swede midge has been identified in several states and Canadian provinces around the Great Lakes and can overwinter in the soil for up to two years. “A good rotation is paramount with this pest,” Reinke said.

Swede midge feeds on most brassicas and likes the tender tissue in the middle of young plants.

Trapping is possible but swede midge is difficult to identify because it’s very small and looks like many other insects. “Most growers find it easier to check for damaged plants,” Reinke said.

Heading type plants like cauliflower are most susceptible to swede midge with blind growth, crinkled leaves and swollen stems the most common damage. Look for small, yellow larvae on the leaf bases of poor performing plants. Target low areas for scouting since swede midge doesn’t like the higher, windier parts of the field.

Besides crop rotation, weed control to remove alternate hosts such as wild mustard, shepherd’s purse and yellow rocket is an important management tool. Maintaining a proper field distance from infested areas is important since swede midge can move up to 1,000 feet in the field. Some crop varieties are also more tolerant to the pest.

Swede midge can totally stop fruit development in brassicas and a tight spray schedule of treating about every nine days is required. “Swede midge is definitely a concern if you grow brassicas,” Reinke said.

Allium leafminer was first confirmed in this country in Pennsylvania in 2014 but hasn’t yet spread out of the Northeastern states.

Leeks are the crop most damaged by allium leafminer. “It really likes leeks,” Reinke said, “probably because of the timing of its life cycle.” Allium leafminer is also found on onions, garlic, chives, shallots and green onions.

Protecting crops from the first generation of adults is the key to managing this pest.