Fall emergence of allium leafminer has been detected in Lancaster County, Pennsylvania.

Allium leafminer (ALM) attacks plants in the Allium genus including onion, garlic, leek, scallions, shallots, and chives. The first signs are the linear series of round white dots on allium leaves. The white dots are made by the female with her ovipositor. Both males and females feed on leaf sap, and egg-laying occurs at this same time. You can also distinguish the adult fly by the orange patch on the head, and the wings folded horizontally over its back. The flies tend to be found at the tips of the leaves in the morning. A good place to look for signs of ALM is on wild garlic, and on actively growing scallions if you have them on your farm.

ALM has two generations per year. It overwinters as a pupa in leaf tissue or adjacent soil, emerges in the spring, and adult flight occurs over 4-5 weeks. Eggs are laid in allium leaf tissue. Larval development progresses to the pupal stage but is then delayed as the pupa undergoes summer aestivation (a resting period with little to no development), and they do not emerge again until the fall. 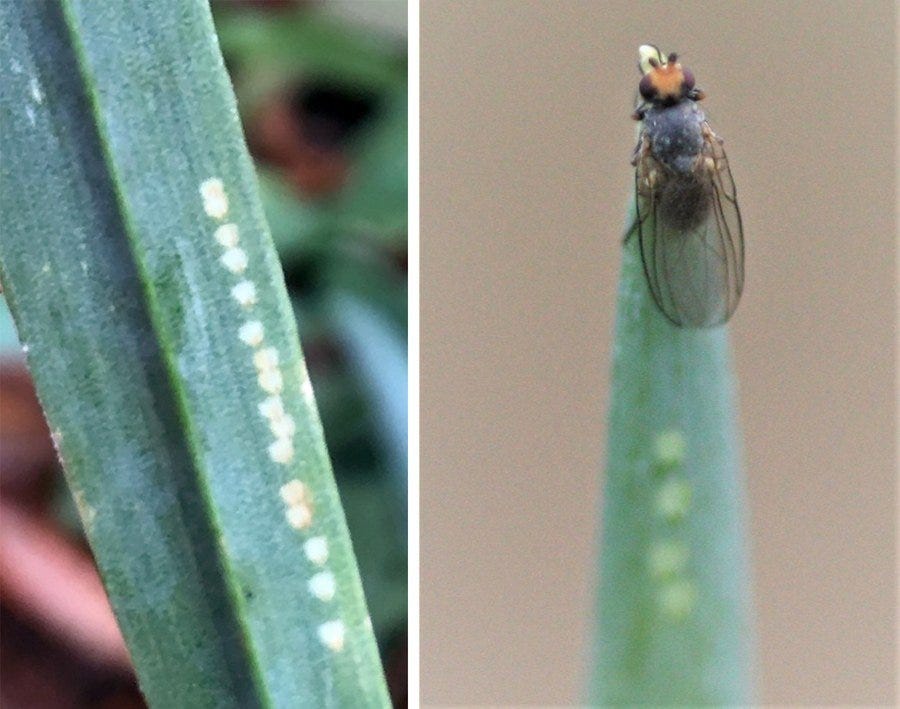 Control measures are only needed during the adult flight period to target adults, and very shortly after to target developing larvae. Control can be achieved with row covers during the adult flight, or insecticides. Through the support of PVGA and NIFA, we completed and compiled efficacy trials, detailed in Nault et al. 2020. Foliar applications of Scorpion (dinotefuran), Exirel (cyantraniliprole), and Radiant (spinetoram) were the most effective and consistent.

Surprisingly, Pyganic plots had higher infestations than control in some trials. Alliums have a very waxy leaf, so including a spreader-sticker or a soap for organic production, is recommended. We used LI-700 for conventional treatments and M-Pede for organic treatments.

We sprayed weekly, for 4 to 6 weeks, to span the time adults were active, but further work is needed to see if we could reduce the number of applications.