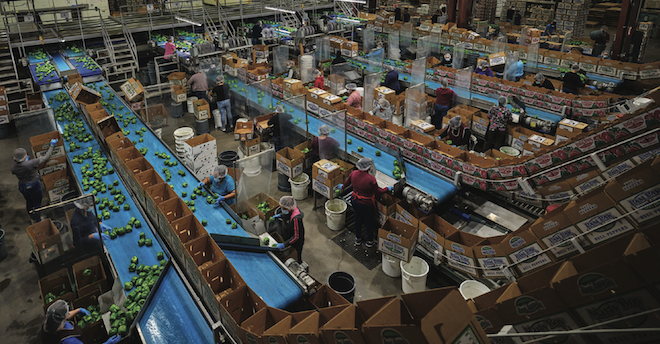 Faith, family and farming are pillars of Baloian Farms, a grower-shipper in Fresno, California, that recently was honored in the industry for its innovation and generosity.

Baloian Farms was recently named the Moss Adams 2021 Agribusiness of the Year. The award is presented each year by the Fresno Chamber of Commerce to a company that has demonstrated industry leadership through innovation and performed philanthropic acts in the community.

Although Baloian is based in Fresno, where it farms, it harvests, packs and ships vegetables from several areas, including Southern California’s Coachella Valley and Nogales, Arizona.

The family is fourth-generation growers, with ancestors who fled Armenia for religious reasons during World War I’s Armenian Genocide. Charles Baloian farmed a 70-acre ranch on Staten Island first in 1917 before moving to the Fresno area in 1920. Charles Baloian’s passion was for “growing healthy food that helps people,” according to Tim Baloian, a third-generation grower who’s now CEO of the company.

Faith and farming remain important to the family. Tim’s brother, Bruce, is a retired seminary professor. Two of Tim’s daughters, and two of Bruce’s sons, are involved in the business.

Staying involved with the farm is a decision future generations will make on their own.

“It comes back to having that passion, being in love with the miracle of farming. Being in love with what you do,” Tim Baloian said. “So, it’s not so much work. It is work, but if you really enjoy it and you see the fruits of your labor, it’s gratifying.”

“We’ve seen a lot of highs, a lot of lows, and there again, it comes back to our faith in God. We believe that God has been faithful to us in allowing us to stay in business this many years and giving us the wonderful people that we work with. That I can’t say enough good about.”

While members of the Baloian Farms family remain highly involved in the farm, Tim Baloian counts all the company staff as family members.

“I can go on and on; there are so many people that have been here so long. (They’ve been) so instrumental in keeping this company going, and in its success, the credit really goes to them. We’re given this award and we’re humbled and honored to get it, but the award goes to the people of this company, or what I call the family of Baloian farms.”

The company has more than 50 full-time staff, and depending on the time of year there can be 200 people in the packing shed, or more than 1,000 people harvesting in the fields. The company uses domestic workers for seasonal jobs. Generations of workers have returned to the farm, and some have moved from the packhouse to the central office.

“I have a grandfather and a grandson working here,” he said. “Some of our young, up-and-coming talent comes from men that have worked here for 30-plus years. Now their sons have come into the business, and daughters too. We have two young women that have really excelled in the company, and we love seeing that. What’s nice is that when the kids come into the business, they kind of understand the culture, because this is a different type of business. It’s a lot of hours. It’s not a nine-to-five job. At certain times a year, it’s a lot of work, and it takes a lot of effort, a lot of energy.

“We love using those people and bringing them up in the organization,” Tim Baloian said. “I think it’s important for people to know that they can move up.”

Baloian Farms’ programs enable the year-round supply of vegetables, especially bell peppers, which make up roughly 63% of its output. Packhouses in Coachella and Fresno, and a receiving center in Nogales, are major hubs of the operation.

“We’ll start bell peppers in Coachella in April, and we’ll pick there in April, May and early June,” Tim Baloian said. “And then from there, we transition to the southern part of the San Joaquin Valley and will be there in June and July. Then we come to Fresno, which we’ll pick in June, July and August. Then from there, we go to Hollister. We’ll start picking there in July and go July, August, September, October. In fact, we’re picking there now (in early November).

“We’re going to pick another nine or 10 days there, and then from there, we transition back to Coachella for a fall crop. That’s what we’re picking now, and we’ll be there until Dec.10. Then we’ll start out of Sonora, Mexico, which will cross through to Nogales. That will start about mid, late November. It will be down there until April, and that completes the full year-long cycle on green peppers.”

Baloian Farms does the same for red peppers, zucchini, cucumbers and beans. It is working on a program to be a year- round supplier of chilis as well. The operation also has a program to provide seasonal mixed vegetables, aka “wet veg.” In addition to some foodservice sales, Baloian supplies major retailers Safeway, Albertsons, Loblaws and Kroger.

“We invest time in getting to know our customers, their particular packs, timetables, desired loading locations or delivery dates and weekly usage numbers,” Baloian Farms Sales Manager Jeremy Lane said. “We take all that information and design a service level tailored for each customer that involves lots of forecasting and advanced planning that can overcome the most difficult supply positions, tough freight situations, holidays, or any other curveballs that produce companies can and do experience on any given day.”

Baloian Farms is willing to try new things in terms of packaging and products for customers. Peppers can be packaged in four or six to a bag, in the classic “stoplight” red-yellow-green, or even “sunrise” red-orange-yellow. Tim Baloian believes that purple bell peppers can also be grown at scale, and he’s willing to try them for a client if there is interest.

So far, “We’ve never really been asked to pursue it,” he said of the purple peppers.

But it’s also given back to the community through charitable foundations such as Fresno Rescue Mission, a mission that houses, feeds and helps people off the street; Seeds in his Garden, a children’s home in Africa; and Bill Glass Prison Ministries, a Dallas- based ministry that works with prisons.

“The Bible’s really clear: Those that have need to share to those that don’t, and I think there’s a responsibility to want to give back, and we do enjoy giving back,” Baloian said. “So, I’ve tried to work with organizations that not only address the physical need but the spiritual needs, like the Fresno Rescue Mission.”